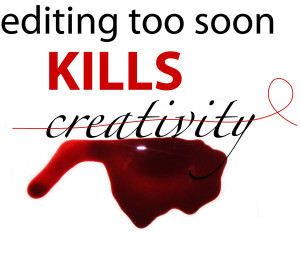 This is a mantra among writers, especially in the creative realm.

There are two main reasons to write first and edit later.

1. Your inner writer needs the space and freedom to say what she or he needs to say. Sometimes you need to write badly for a while to get through to what you’re really trying to say.

Take writing an anecdote for example. You’ll probably need to write out the whole (or most) of the story in detail. Later you’ll be able to determine more and more details that can be trimmed out for brevity and clarity.

2. When editing, you need fresh eyes to see the words you’ve been laboring over.

As an editor of a magazine, I also occasionally wrote for the publication. In one piece that I wrote, another editor pointed out an error in my article. I couldn’t see it as an error, even after three or four rereadings. The next day, I looked again, and was able to see it. It actually read as the exact opposite thing I was trying to say! I’d just been looking too closely for too long to be able to see its incorrectness.

A good rule of thumb for preparing your support letter: Give yourself enough time before that deadline to have at least 20 minutes between typing your last sentence and editing. More time is better, and coming back to it the next day is even better.

Do you have any tips as to how you edit your own writing?